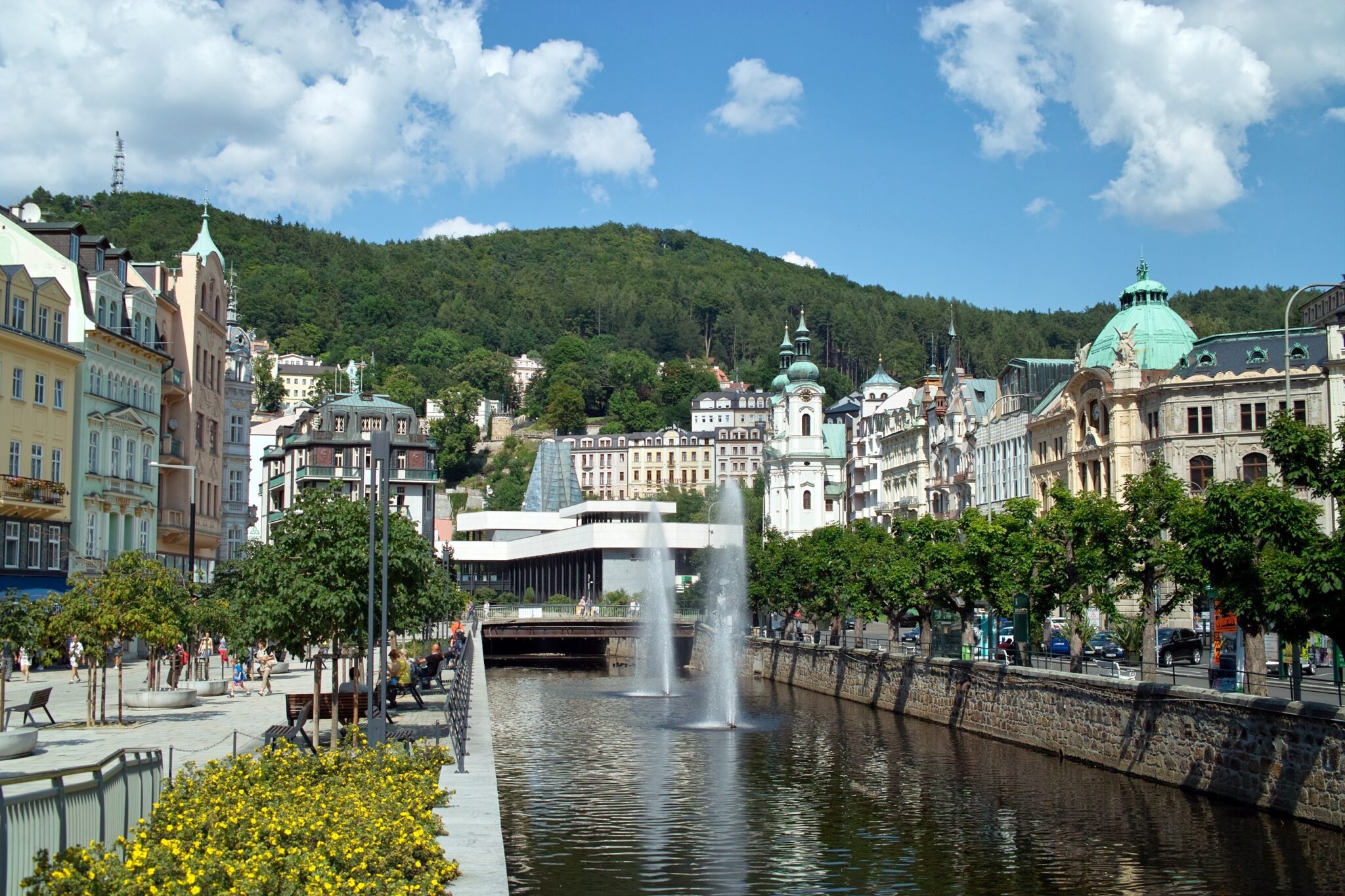 What to see in Karlovy Vary

The city of Karlovy Vary is certainly the most famous and the most visited spa town in the Czech Republic. In 2019 the city had almost 2 million visitors who spent at least 1 night there, a number that grows steadily every year since the fall of communism in 1989. People were coming to Karlovy Vary for centuries to enjoy the spa procedures of the local healing mineral water and to admire the picturesque landscape of the city center which lies in the valley created by the river Teplá. There are many beautiful sites in the city center that are worth seeing, so here is our list of what to see in Karlovy Vary:

Your tour of Karlovy Vary will most likely start at this hotel. It stands on the western point of the historical center. It was built in 1976 in a style called brutalism on a spot where previously 30 art nouveaux houses from the 19th century stood. Since its conception it was designed as a convention center and as the main building where the Karlovy Vary international film festival takes place. Today it is owned by the state and it is undergoing massive renovations. The hotel has an outdoors swimming pool that

Since its construction the hotel was received with mixed feelings. Eventhough 45 years passed, still there are many locals who are in favor of tearing the building down. When hotel Thermal was finished in 1976, the bill for its construction rose up 410 million crowns. The same price for which you could build a small town at the time. Therefore many people see it as a symbol of communist arrogance. However the younger generation starts to take it simply as a symbol of one era and perhaps one day it will be appreciated.

This would probably be the first collonade that you will stumble upon if you are coming to the city center from the hotel THermal. Inside is located the snake spring, the coldest and allegedly the tastiest spring in Karlovy Vary. Why the snake spring? Because snakes like to live near the collonades since it is warm and wet nearby in the tall grass.

Mill’s colonnade is the largest one out of the five colonnades in Karlovy Vary. It was built in 1881 and the name is derived from an old mill that used to stand on its spot. It was designed by the architect Josef Zítek, the same architect who built the National Theatre or Rudolfinum concert hall in Prague. The colonnade encompasses 5 springs, mostly too hot to drink using your bare hands. Therefore locals usually drink the springs with a local specialised pot with a straw that allows you to drink hot springs. On the roof you will find 12 statues, allegories of months.

The main spring in Karlovy Vary is called Vřídlo or der Sprudel in German. The source of the spring is located 2 km underground where the volcanic activity warms it up therefore when it reaches the surface, it shoots like a jet up to 12m high, at 73 C. Another reason why it shoots up 12 m high is the high CO2 content. It is a similar effect to when you open a bottle of champagne. All the other springs in Karlovy Vary are merely branches of the main spring, Vřídlo.

The original colonnade stood above Vřídlo since 1879 and it was gorgeous. However when Adolf Hitler visited Karlovy Vary in 1938, its predominantly german population gave him the colonnade, which was made out of cast iron, to use in the army industry. So the original colonnade was dismantled and in 1975 replaced with the current colonnade. Recently there was a referendum to demolish the colonnade and replace it with a copy of the original one, however it did not pass because the attendace of voters was too low, 33.6% instead of 35% required. Most people voted to replace it.

The church was built in 1736 by the architect Kilian Ignacius Dientzenhofer and remains as one of the oldest structures in Karlovy Vary.

The history dates back to 1701 when a so called Saxon hall was built on its spot. Later other buildings were built around it and in the 19th century they were unified and rebuilt into a single hotel by the Pupp family who were descendants of Jan Jiří Pop, a czech confectioner. The hotel underwent its neobaroque reconstruction in 1907 by architects Ferdinand Fellner and Hermann Helmer. Today it remains the most luxurious hotel in Karlovy Vary where most of the celebrities stay during the film festival. In 2006 the bond movie Casino Royale and Last Holidays were shot here.