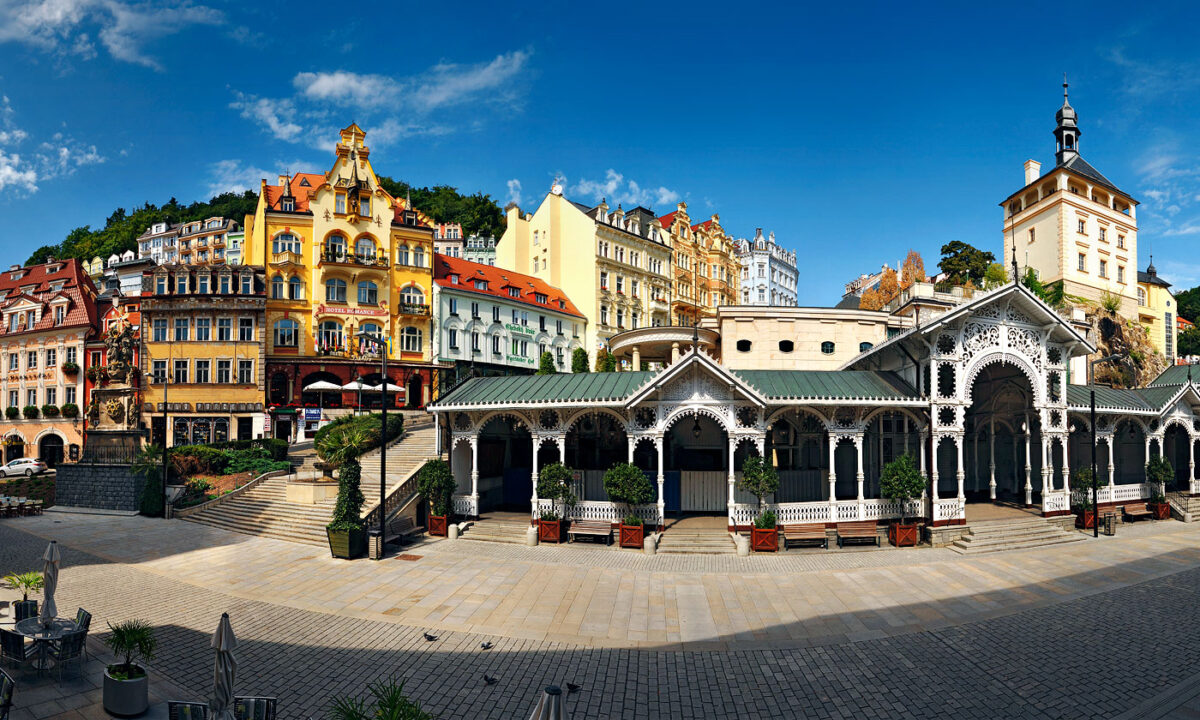 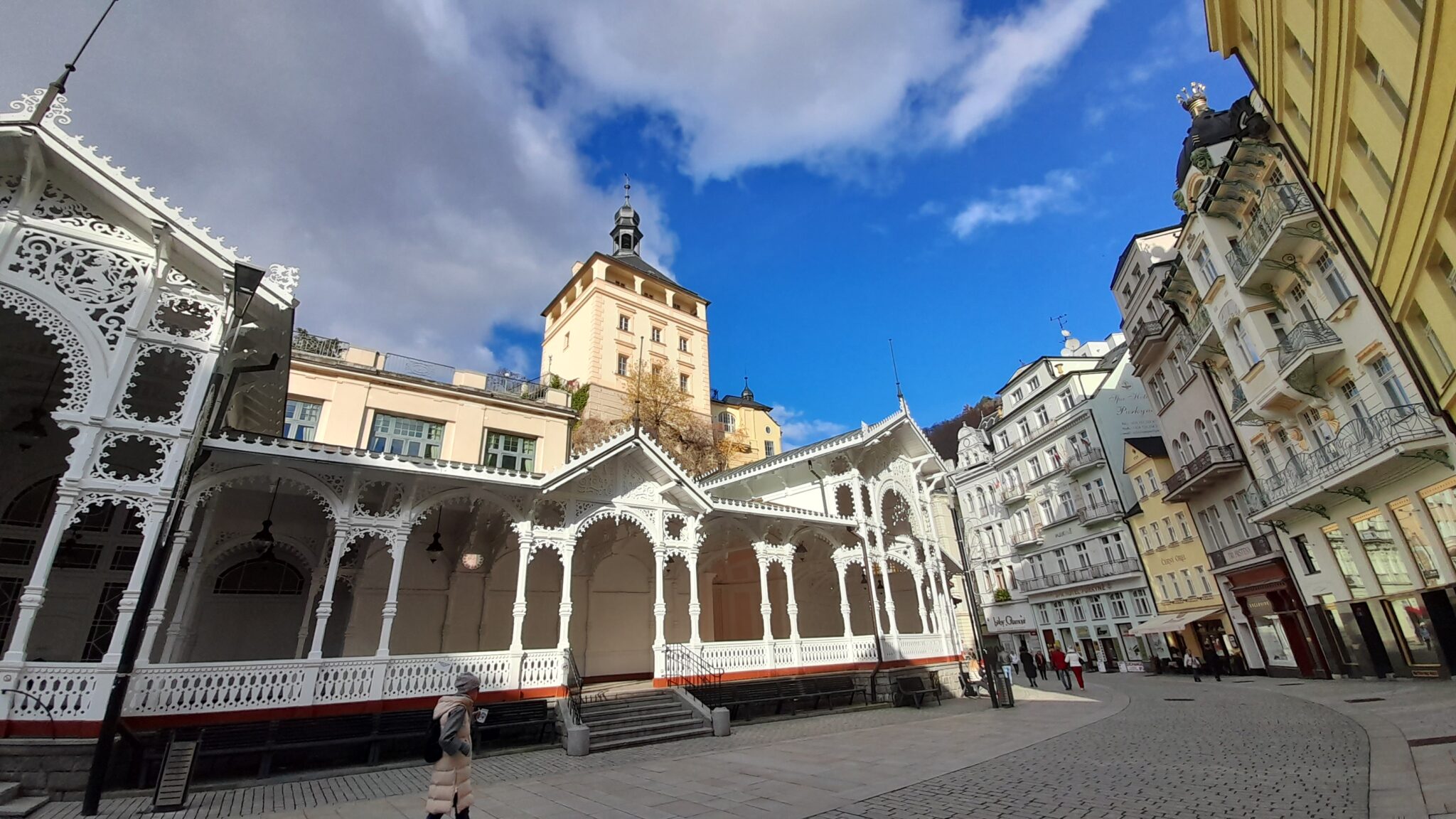 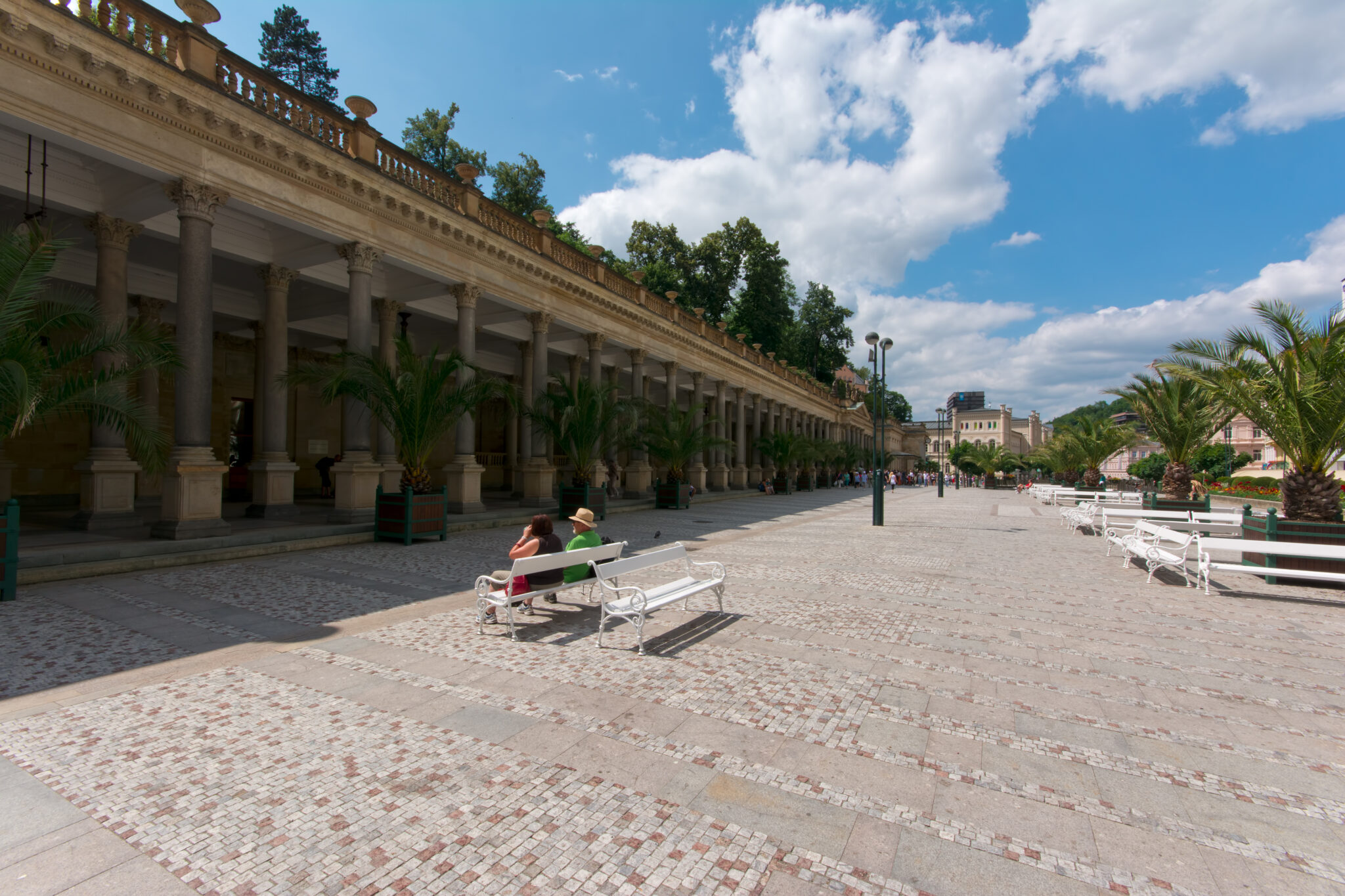 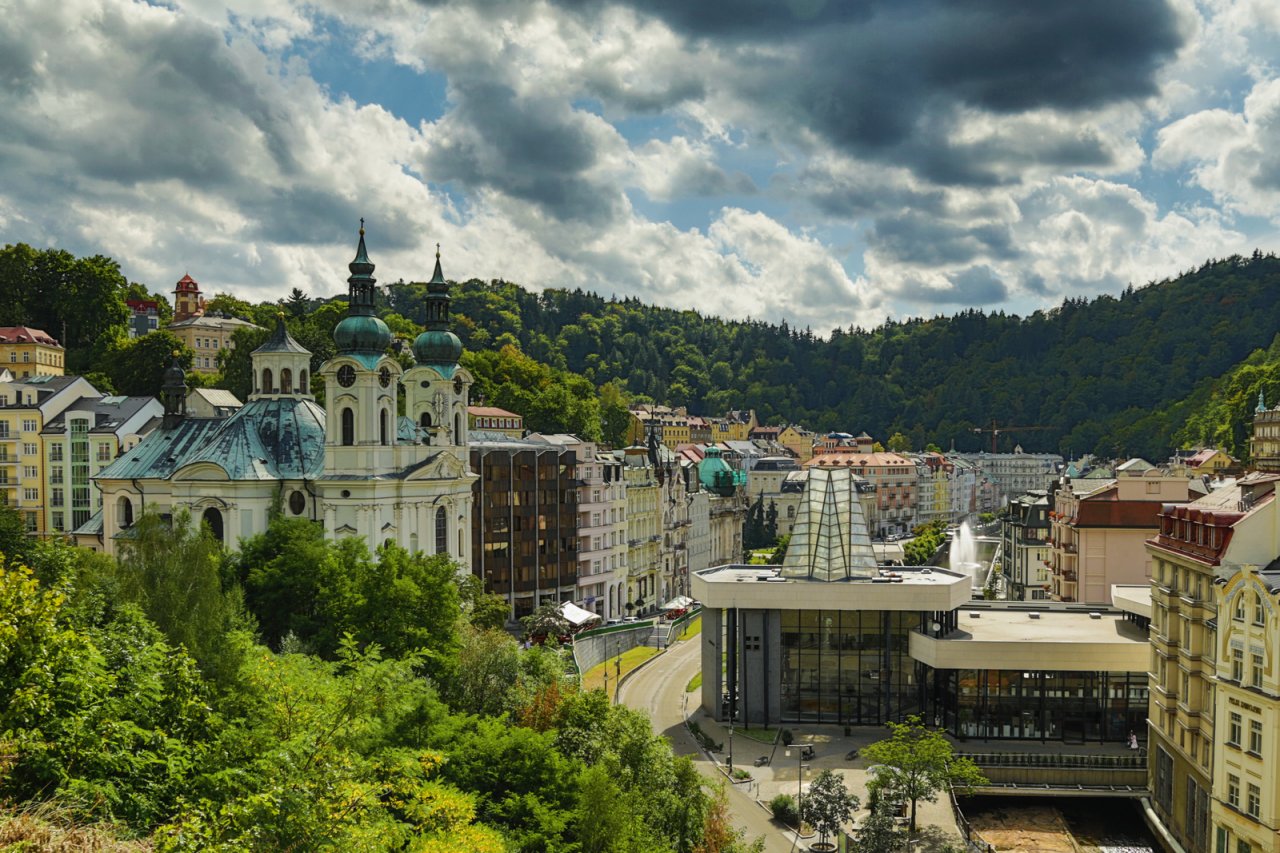 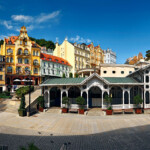 Let us take you on a tour from Prague to Karlovy Vary, the biggest spa town in the Czech Republic with its marvelous architecture and romantic atmosphere. Walk with our private tour guide through the same streets as the german poet Johann Wolfgang Goethe, who met his last love while relaxing in the bohemian spas, and the russian Czar Peter I, who visited Karlovy Vary three times. Admire the place where Antonin Dvorak performed his symphony „From the New World“ for the first time or feel like James Bond while walking down the halls of Grand Hotel Pupp where the 2006 movie Casino Royale was filmed. Hot springs, amazing colonnades and much more!

In the deep forests of Western Bohemia 110km from Prague lies a town where all your senses will boost some positive energy and where you’ll get nicely relaxed. In this glamorously wonderful spa town you will see why Karlovy Vary is one of the most famous spa destinations in all of Europe.

Even though the spa town of Karlovy Vary was founded by the holy roman emperor and Czech king Charles IV in 1350, the reports about the miraculous effects of its healing springs became known to the world mainly in the 18th and 19th century. Since then many people from all around the world are visiting this place to experience it by themselves and so should you.

First on the way we usually visit the most prestigious glass factory in the Czech Republic called Moser glass factory. Our country has a very high standard of glass making. It was founded by Ludwig Moser in 1857 who later in 1875 became the court glass supplier of the emperor of Austria-Hungary Franz Joseph I. Later he supplied glass to many famous people such as the Persian shah Musaffereddin or the English king Edward VII.

You can see with your own eyes the factory inside and see how the skilled glass blowers make stunning pieces of glass. How they are taking out the hot material from huge furnaces and how they blow it with their lungs into shapes of vases and glasses. In the furnaces which are operating 24/7 the temperature is between 1100 – 1500 °C so be prepared that it is going to be hot in there. Jacket on this tour is not needed. 🙂

In the heart of Karlovy Vary at the beginning of the spa zone was built between 1967-1976 one of the most famous hotels in town. Architects were Vera and Vladimir Machonin and it is a great example of a brutalist architectural style. Hotel was meant to be the center of the International film festival of Karlovy Vary which has been held in the town every year since the 1950s. It is one of the oldest film festivals in the world and it is the most prestigious film festival in Central and Eastern Europe. Some of the most famous Hollywood stars walked on the red carpet here in Karlovy Vary.

The town has about 81 springs but only 15 of them are accessible to the public. Each spring has its own name and they vary with their temperature. The taste is very similar. It has many minerals in it and after a while you can get easily used to its warm and salty taste. All the springs have one source which stays in the depth of 2500 meters below the surface. The biggest spring is named Vřídlo and it has 73,4 °C and it naturally springs 12 meters high. 13 of the springs you can actually taste in 5 beautiful colonnades which were built especially for drinking the springs and leisure time of the spa guests. Our private tour guide will show you where to get a special cup made for drinking the springs which you can later keep as a nice souvenir.

Built in 1881 by Viennese architect Fellner and Hellner made by cast iron lies in a park of a famous Czech composer Antonin Dvořák who was visiting Karlovy Vary often for meetings with his colleagues from the classical music industry. You will find here a spring called snake spring which is one of the coldest in Karlovy vary. Try to taste this one and then the hottest one and you will see the temperature can affect the taste of the spring.

It is the largest one and the most famous one in Karlovy Vary. Built by a famous Czech Architect Josef Zitek in 1881 in neo renaissance style it looks like an antique temple with Corinth columns. Josef Zitek is also the architect of the famous National Theatre in Prague.

It is a wooden one beautifully carved in Swiss style and it covers the spring n. 2 named after the founder king Charles IV. Would you like to hear the legend about how the springs were founded by the emperor? Our private guide will tell you!

The main spring colonnade was built in the 1970s and it was built in brutalism architectural style and it covers the most famous and main spring called Vřídlo. Here we will show you how the water spews out from the ground up to 12 meter high.

Baroque church in the heart of the town built in 1730s by famous baroque architect Kilian Ignac Dientzenhofer. The same guy is responsible for example for the majestic church of St. Nicolas in Prague and many other significant Prague’s structures.

Do you like funiculars? In Karlovy Vary there is one from 1911 and at its time it was the longest funicular in Austria-Hungary. It will take you to Diana watchtower which offers a breathtaking view of the whole region of Karlovy Vary. And don’t worry, there is an elevator which we can use inside the 40 meters tall tower.

What a visit to Karlovy Vary would be if we did not show you the most famous hotel dating back to 1701. From the famous visitors we can name: Johann Sebastian Bach, Ludwig van Bethoven, Richard Wagner, Tsar Peter The Great, Empress Maria Theresia, King Eduard the VII, King Juan Carlos I, Napoleon Bonaparte, Otto von Bismarck, or actors John Travolta, Michael Douglas, Antonio Banderas or writers Franz Kafka or Giacomo Cassanova and many more.

There are many other points of interest that are not on the list. Join us on a private tour and see the beautiful spa town Karlovy Vary! Check out our Karlovy Vary and Marianske Lazne private tour to see the extended version of this tour.